So, many moons ago when I was a young man, my good friend Ryan and I spent a small fortune in an arcade. Pinball was our game of choice and there were two pinball machines we played religiously – Cyclone and High Speed. I think for the amount of money we spent playing them over the years, we probably could have bought them.

Fast forward a couple of years (or decades) and I came upon an opportunity to do just that… buy one of those pinball machines we spent so much money on as kids. A friend of mine let me know about a guy selling a High Speed pinball machine that needed some work. The opportunity was too good to resist. I picked up the machine and started restoring it. It didn’t take long for me to realize that restoring an old pinball machine wasn’t exactly in the wheelhouse of things I do well. So I did something I CAN do well… pay someone to do it for me.

I put in a lot of hours playing that restored High Speed. So many hours, I started looking for the other machine that consumed so much of my time and money as a teenager. I eventually found a Cyclone in decent condition, the only problem was, it was 5 hours away in North Carolina. Not easily deterred, I made the 10 hour round trip to acquire our newest family member only to discover that it too needed restoring. By now I had gotten much better at working on pinball machines and actually got this one a lot further down the road. Not far enough though, and I ended up taking this one to the restoration shop too.

I now have both pinball machines from my youth and I am just sitting back, waiting for Ryan to come visit so we can spend all night drinking monster sodas and playing the two magnificent pinball machines.

If you’re ever feeling lucky, or if you think you might have some skills in the pinball playing arena, hit me up and maybe we can put together a little tournament. Until then, I will keep practicing and working on my next project…

Until then, here are a couple of pictures of the Cyclone and High Speed. 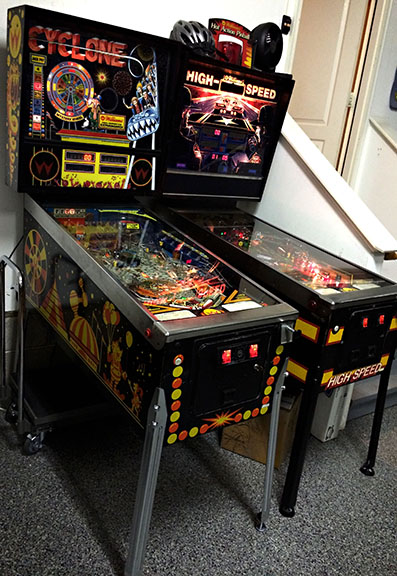